I like the idea of yoga.  It seems to be the lazy way to exercise, and that shit is right up my alley.  I took one class and would take more if it weren’t for the herd of unkempt, unwashed sycophants doing their best to achieve the Yoga Persona. You know the ones.  Things like deodorant, shampoo and a brush are not needed.  Hemp clothing, canvas shoes and half-sleeve tat’s are must-have’s for all.

They go as limp as organic lettuce instead of taking a stand on anything, ever, because it might offend someone.  They toss around vague statements such as “the energy flows over the path of least resistance” and “this is a matter of discernment” with their eyes half-closed as if they are channeling some ancient wisdom from some ancient Guru.

Worst of all, they believe their own sanctimonious bullshit and assign themselves the role of teacher to the rest of us dumbasses.  This is where it gets sticky, the whole interacting part.  They hold themselves as different (and better) than the rest of us.  They are unique, just like all of their friends.

Before class, I was educated on vegan diets, the benefits of group-chanting in a sweat lodge, and meditation.  Uh-huh.  I can only fake smile for so long before I want to punch someone.  All I wanted to do is tone up and maybe lose a few pounds, but the cult-like tribe of hippies wouldn’t shut the fuck up and let me center my god-damned chi.

As the Yoga Guru Person guided us from position to position, I tried my hardest to center and find my inner peace as instructed.  I mean, several of these people are ripped and toned to hell… something must be working, but shit – how can I “inhale deeply and relax into the pose” when all I can smell is the essence of the downward dog in front of me?   I have a moldy ass crack pointed at my head and I’m expected to inhale deeply and relax?  Fuck!

I still like the idea of yoga.  It’s the yoga class I will avoid like the plague.  Unless you enjoy the aroma of moldy ass crack while you’re being forcibly enlightened, I suggest you do the same.

This has been a public  sanity announcement. 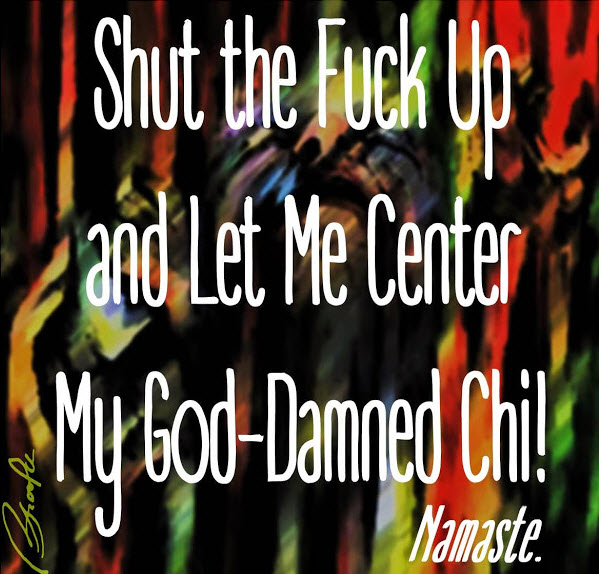