Trending
You are at:Home»EXTRA!! EXTRA!!»Pebbles Flintstone Bares All in Playboy
By Bear on September 22, 2014 EXTRA!! EXTRA!!
“I’d love to Yabba Dabba Doo her”
– Barney Rubble 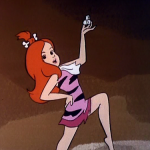 Pebbles is back in the spotlight again – but this time, the former child cartoon star won’t be appearing in court. Ms. Flintstone, who has faced a continuing battle with drugs and alcohol since the cancellation of the show that made her a household name, has announced plans to appear in Playboy magazine.
“Uh he Uh he he… I’d love to Yabba Dabba Doo her, if ya know what I mean,” Barney Rubble told reporters, “BAM BAM! BAM BAM BAM! Uh he he, sorry Bamm Bamm – wherever you are.”