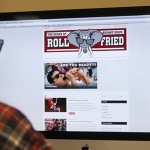 The Crimson White, the student newspaper at the University of Alabama, is currently under investigation for torturing students by forcing them to sit in front of a computer, for hours on end, watching a “carousel” of featured items on one of the Internet’s most vapid, inane websites.
“It was just a bit of harmless hazing,” Deanne Winslett, the current editor of the CW, attempted to explain, “But I guess we did carry it a bit too far with Yun Yu.”
The bizarre ritual, which many of the staff related has been going on “for years”, was uncovered when an international student was actually forced to write an article about the site.
“Watching the carousel was bad enough,” an exasperated Yun Yu explained, “But then they… they -”
Ms. Yu then broke down sobbing. Apparently, she had been forced to actually click on EVERY image featured in the carousel, then write an article about the site, featured here:
Satirical website promotes local artists
The University has yet to release what punishment will be levied on The Crimson White, but Winslett has been temporarily suspended while all reporters subjected to the sadistic torture are provided psychological counseling.
If you, or a loved one, are currently reading this article or have ever suffered viewing this site, you are asked to please close your browser and seek immediate help. As for poor Yun Yu, we can only offer our deepest apologies.